The County Government will function as the designated Administrating Agency for the Operational Area. This responsibility and Authority will extend to both operational management, as well as to day-to-day administration of all Operational Area issues and activities. The Office of Emergency Services will fill this role."

THE MONTEREY COUNTY OPERATIONAL AREA COMPLIES WITH BOTH FEDERAL AND STATE GUIDANCE TO USE NIMS AND SEMS.

Monterey County is located on the north-central coast of California. The adjacent counties are Santa Cruz to the north; San Benito, Fresno, and King to the east; and San Luis Obispo to the south. The Pacific Ocean borders the County to the west. At its northernmost boundary, the County lies 92 miles from San Francisco, and at its southernmost boundary, the County lies 222 miles from Los Angeles on U.S. Highway 101 (US 101). The County occupies an area of 3,324 square miles and has 100 miles of coastline, two coastal ranges (the Santa Lucia and Gabilan Mountain Ranges), and two valleys (the Salinas and Carmel Valleys). Areas along the coast experience a Mediterranean-like climate that is characterized by moderate temperatures, a winter rainy season, and cool dry summers. Further inland, temperatures are more extreme and rainfall is considerably less. 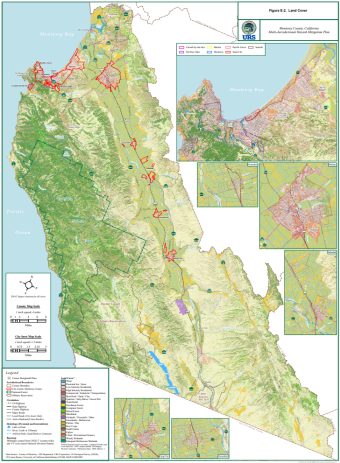 Many of the hazards that exist in or adjacent to Monterey County have the potential for causing disasters exceeding any one jurisdiction‘s capabilities to successfully respond, making centralized command and control and the support of the County and its departments and agencies essential.