Programs of the Agricultural Commissioner

The Agricultural Commissioner is dedicated to worker health and safety, the protection of environmental resources, and the promotion of the agricultural sector of Monterey County.

The California Department of Pesticide Regulations (CDPR) recently made available a new Maintenance Gardeners and Pesticide Safety brochure in English and Spanish.

The brochure summarizes what a pesticide is and emphasizes that the label is the law, and it must be followed. It also contains licensing requirements. If you are a Maintenance Gardener Pest Control Business, licensed by CDPR, you must register your business in the counties where you intend to work. The brochure briefly describes Best Pre-application, Application, and Post-Application Practices as well as Best Pesticide Storage and Disposal Practices.

If you need additional information, please stop by our office, and a Pesticide Use Enforcement Inspector will be happy to answer your questions. 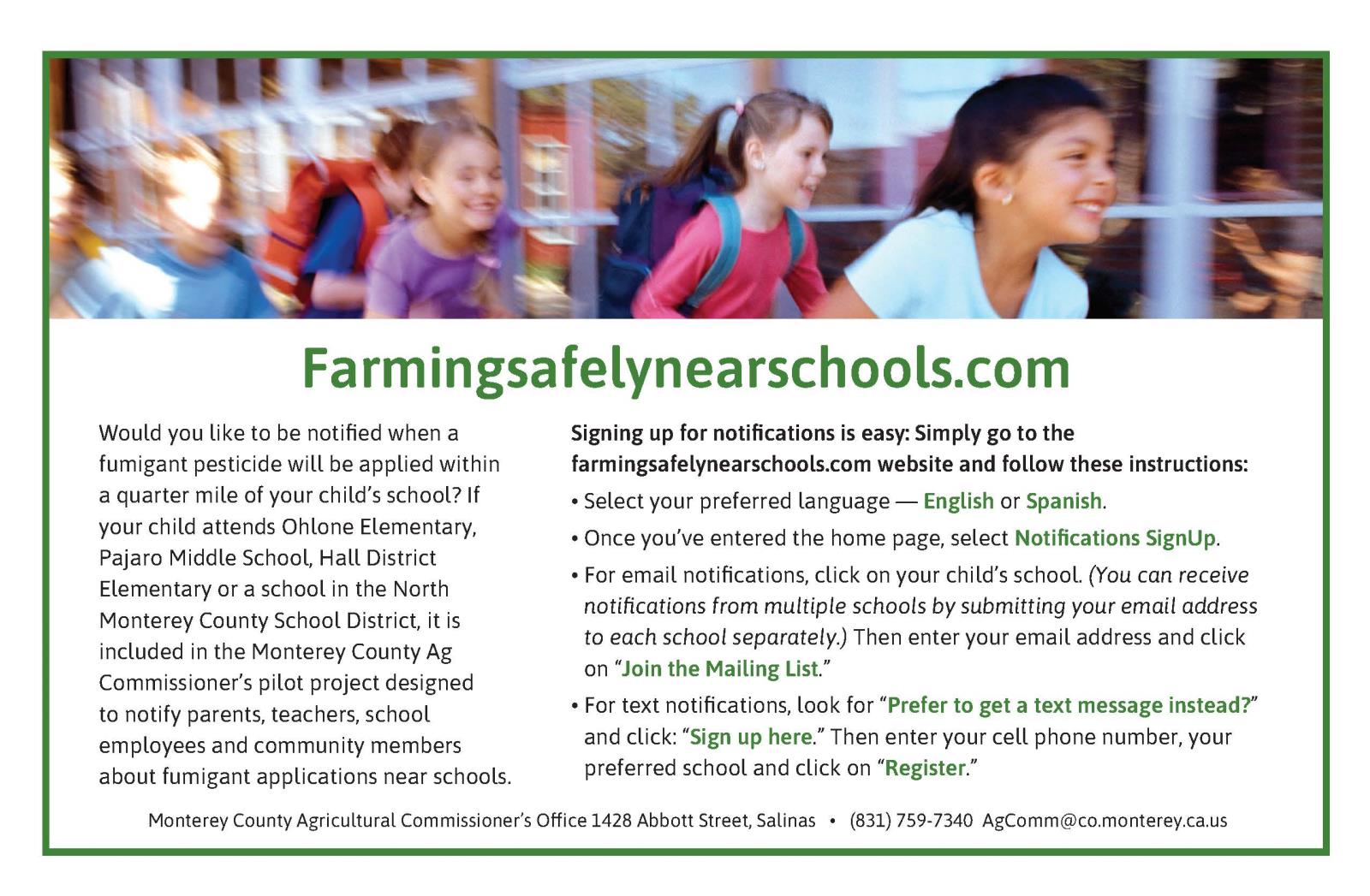 Updated 6/12/19
The California Department of Food and Agriculture (CDFA) is developing the regulations to implement the industrial hemp pilot program in California.  Registration with the Agricultural Commissioner is now available.  The Monterey County Resource Management Agency (RMA) considers industrial hemp to be a land use like cannabis cultivation, and all requirements for cannabis are in effect, including a land use permit from the RMA.

The California Industrial Hemp Farming Act (Senate Bill 566, Chapter 398, Statutes of 2013) was signed into law to authorize the commercial production of industrial hemp in California.  The Act became effective on January 1, 2017, due to a provision in the Adult Use of Marijuana Act (Proposition 64, November 2016).  Legislation has been enacted at the state and federal levels to include hemp extract crops and to remove other barriers to an industrial hemp pilot program.

As directed by the California Hemp Act, the California Department of Food and Agriculture is developing an industrial hemp pilot program.  There are state regulatory requirements to grow hemp, including, but not limited to, registering with the Agricultural Commissioner, testing, and crop destruction.  CDFA has adopted regulations for approved seed cultivars and for registration with the Agricultural Commissioner.  Check with the CDFA Industrial Hemp web site for further information.

Cultivation of industrial hemp is allowed for the purposes of agricultural or academic research if such research is performed in conjunction with a qualified educational institution.  Research is exempt from many of the regulatory requirements that will apply to commercial hemp cultivation, but a land use permit from the Monterey County RMA is required for any hemp cultivation in the County, including research.  Researchers intending to operate in Monterey County should contact the Agricultural Commissioner and the RMA.  Any operations found to be outside of the law will be subject to enforcement.

Monterey County had its first detection of Asian citrus psyllid (ACP) on June 7, 2016, in a residential area of Northeast Salinas.  This resulted in voluntary treatment of hosts within 400 meters of the find, and the establishment of a five-mile quarantine area.  Any find triggers a delimitation trapping survey, treatments within 400 meters of the find, and possibly an expansion of the quarantine area.

A second find of a single psyllid was confirmed in November 2016 from a trap in the Toro Park area.  This resulted in the expansion of the quarantine area and a new delimitation survey.  The quarantine expansion area has few hosts and no commercial citrus or nurseries.

A third find of a single psyllid was confirmed in June 2017 from a trap in Spreckels.  This again resulted in an expansion of the quarantine area.

A fourth find of a single psyllid was confirmed in December 2018 on a citrus tree located at 129 Buena Vista Park in Soledad. The California Department of Food and Agriculture (CDFA) initiated a 50-meter survey around that find site and immediately found several more properties that had ACP. Due to new ACP finds, the surveys expanded to the west to include the Santa Elena Mobile Home Park where multiple ACP life stages of adults and nymphs were found.

The Notice of Treatment for the Asian Citrus Psyllid in Soledad 1 was obtained, and the public meeting was held at the local High School on January 22, 2019. Residents of affected properties were invited to the public meeting where officials from CDFA, Department of Pesticide Regulations (DPR), Office of Environmental Health Hazard Assessment, and the County Agricultural Commissioner’s Office were available to address resident’s questions and concerns. Residents were notified in writing at least 48 hours in advance of any treatments in accordance with the Food and Agricultural Code sections 5771-5779 and 5421-5436.

The Soledad 2 area was triggered after a find at 1828 Monterey Street was confirmed on January 9, 2019. A new 400-meter treatment area was put in place. This area slightly overlapped the Soledad 1 area.

The Notice of Treatment for the Soledad area was then amended to include the newly expanded treatment area. The second public meeting was held on February 28, 2019. Treatments began on March 4, 2019.

In addition to treating citrus hosts in the Soledad ACP infested area, the Agricultural Commissioner’s Office will be adopting a program to release Tamarixia radiata, an Asian Citrus Psyllid parasitoid.

Asian citrus psyllid is a threat to California's citrus industry.  It transmits a disease called Citrus Greening or Huanglongbing (HLB) that is fatal to citrus trees.  HLB causes asymmetrical yellowing and splotching of leaves.  Affected trees produce bitter, inedible, misshapen fruit and eventually die.  The ACP is a small insect about the size of an aphid.  It feeds on citrus stems and leaves, especially tender new growth.

HLB disease has been found in Southern California.  It can be spread through the movement of citrus trees, fruit or infected budwood.  Homeowners should plant only certified disease-free citrus from a reputable nursery and not move plant material around.  Inspect your citrus often and report any suspicious insects or symptoms to the Agricultural Commissioner or call the CDFA hotline at (800) 491-1899.

A map of the ACP quarantine area is available here: Map

The public review period for this document begins on August 17, 2017, and ends on October 3, 2017.  This review period is established for the purpose of receiving written comments on the accuracy and adequacy of the Draft EIR together with other information relative to the environmental effects of the project.  You may click on sections of the document shown below.

The 2017 Ranch Map paper atlases are available at the Agricultural Commissioner’s office in Salinas.

A Business of Details - Exporting a California Specialty Crop

Companies that are new to exporting and companies that have previously considered and abandoned an exporting plan can use A Business of Details to get up to speed on terminology, processes, common pitfalls and strategies for success. This training video follows a shipment of Romaine Lettuce from a packing facility in Salinas, CA to its destination in Taiwan.

Accelerated erosion is a violation of Monterey County Code.
Keep your valuable soil and be a good neighbor – Be Prepared!