Programs of the Agricultural Commissioner

Yellow star thistle (YST) is a bushy winter annual that has invaded more than 12 million acres of land in California. It is widely believed that YST came to California in the 1870’s, an uninvited guest in the alfalfa seed imported from Chile.

The weed inhabits hillsides, grasslands, woodlands, fields, roadsides and open rangelands, and is considered one of the most seriously invasive weeds in the state. A large plant can produce nearly 75,000 seeds annually, can reach 6 feet in height and can have a taproot reaching 3 feet into the soil allowing it to thrive during the dry, hot San Antonio Valley summers.

The management of YST includes reducing/eliminating the weed’s seed bank and encouraging plant diversity to prevent re-invasion. While all methods can be effective to some degree, studies have shown that two or more methods used in concert over a multi-year period are often most effective.

Two years ago, Southern Monterey County Rural Coalition (SMCRC), a non-partisan group of local residents concerned about the spread of YST, approached other stakeholders (Fort Hunter Liggett and Monterey County). The three stakeholder groups held several meetings in which they explored the available opportunities for controlling YST and agreed to undertake a three-point process aimed at reducing the effects of YST in the San Antonio Valley. The program included Landowner Education, Identifying and Utilizing Available Resources and a Demonstration Project.
I. Landowner Education
Our first objective is providing education for landowners regarding the benefits of controlling YST on their land. We gathered, compiled and edited available information regarding the control of YST into a 9-page booklet with illustrations for landowners. The booklet is currently in distribution to any and all landowners who would like to have information about what to do to control this destructive weed. To receive a downloadable copy of the booklet click here.
II. Identifying & Utilizing Resources
Another important objective is investigating, identifying and enlisting potential resources to support YST eradication efforts in the San Antonio Valley. As we move forward into the project, SMCRC will support land-owner efforts to control YST on their land by providing discounts on herbicides and making rental of spray equipment available to landowners at a nominal cost.
III. Demonstration Project

A third objective is facilitating a cooperative effort between stakeholders (landowners, military and county) visually demonstrating in a specific and accessible area how current YST infestations and further spread of this invasive weed on public and private land in the San Antonio Valley can be controlled. 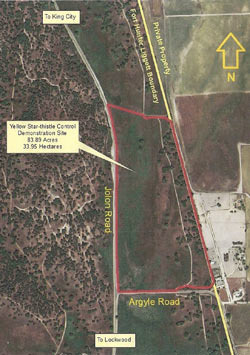 The stakeholders identified a 60-acre parcel of military land on Jolon Road just north of Argyle Road to serve as a demonstration area. The site has been significantly infested with yellow star thistle for several years and provides a perfect opportunity to demonstrate the effectiveness of control methods.


The area just south of Argyle Road is similarly infested, and will serve as the “control area”, demonstrating what happens when no control methods are employed. Both areas are clearly visible to local residents as well as travelers from out of the area. We anticipate local and out-of-area travelers will notice the changes that occur in the demonstration area and understand the feasibility and benefit of YST management on their own land.

On March 14th, the coalition came together, this time to spray the emerging yellow star thistle rosettes in the demonstration area with the pre-and post-emergent herbicide, Milestone. Milestone is a YST specific herbicide, but is benign to other plants and animals, leaving native grasses and wildflowers untouched. The objective was to kill the YST rosette before it had a chance to set seed. A secondary advantage of spraying early in the life-cycle of YST is that the herbicide can actually contact the soil providing a residual pre-emergent herbicidal benefit.

Although the controlled burn in the fall of 2012 eliminated a majority of the standing YST thatch, some patches remained due to rain prior to the burn. To eliminate these remaining patches, the military mowed the demonstration area prior to the spray application, assuring that the herbicide would directly contact the emerging rosettes.

A local company, Integrated Crop Management, agreed to spray the demonstration area, using a spray rig with two 9-foot spray booms and towed by an ATV. In some areas, hand-held sprayers were utilized to assure maximum coverage of the herbicide. On the same day, the Monterey County Ag Commissioner sprayed the adjacent roadside access, assuring elimination of subsequent yellow star thistle spread from the roadside to the demonstration project. The herbicide application process in the demonstration area took approximately 6 hours and covered a little under 40 acres. Die-off of the thistle rosettes was observed within 10 days.

In early June, coalition members will observe the condition of the demonstration area and spot spray any observed infestations.

Stakeholders will conduct a demonstration area site evaluation to determine the overall effectiveness of control tactics to date and to establish third year control tactics. Results will be visible to anyone passing by the demonstration site and will be made available on the website.

With these actions, and their anticipated positive results, the coalition hopes to encourage and facilitate continued communication, cooperation and a concerted effort by all stakeholders to reduce current infestations and prevent further spread of yellow star thistle on public and private land in the San Antonio Valley.

Please visit our website (and the demonstration site, if possible) frequently, as we plan to update information as activities occur. 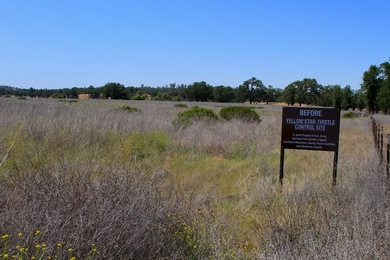 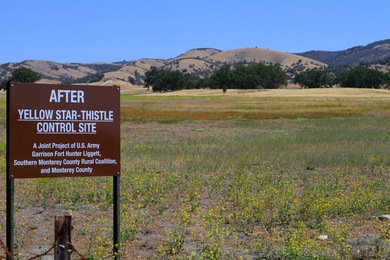