How do I know if I have chlamydia?

Most people who have chlamydia have no symptoms. If you do have symptoms, they may not appear until several weeks after you have sex with an infected partner. Even when chlamydia causes no symptoms, it can damage your reproductive system. Women with symptoms may notice:

Symptoms in men can include:

You should be examined by your doctor if you notice any of these symptoms or if your partner has an STD or symptoms of an STD.

STD symptoms can include an unusual sore, a smelly discharge, burning when urinating, or bleeding between periods.

How will my doctor know if I have chlamydia?

Laboratory tests can diagnose chlamydia. Your health care provider may ask you to provide a urine sample or may use (or ask you to use) a cotton swab to get a sample from your vagina to test for chlamydia.

Can chlamydia be cured?

Yes, chlamydia can be cured with the right treatment. It is important that you take all of the medication your doctor prescribes to cure your infection. When taken properly it will stop the infection and could decrease your chances of having complications later on. You should not share medication for chlamydia with anyone. Repeat infection with chlamydia is common. You should be tested again about three months after you are treated, even if your sex partner(s) was treated.

I was treated for chlamydia. When can I have sex again?

What happens if I don’t get treated? 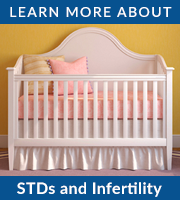 The initial damage that chlamydia causes often goes unnoticed. However, chlamydia can lead to serious health problems. If you are a woman, untreated chlamydia can spread to your uterus and fallopian tubes (tubes that carry fertilized eggs from the ovaries to the uterus). This can cause pelvic inflammatory disease (PID). PID often has no symptoms, however some women may have abdominal and pelvic pain. Even if it doesn’t cause symptoms initially, PID can cause permanent damage to your reproductive system. PID can lead to long-term pelvic pain, inability to get pregnant, and potentially deadly ectopic pregnancy (pregnancy outside the uterus).

Men rarely have health problems linked to chlamydia. Infection sometimes spreads to the tube that carries sperm from the testicles, causing pain and fever. Rarely, chlamydia can prevent a man from being able to have children.