Health Alert: Ebola Outbreak in the Democratic Republic of Congo - May 22, 2018

The California Department of Public Health (CDPH), in collaboration with the U.S Centers for Disease Control and Prevention (CDC), is closely monitoring the current Ebola virus disease (EVD) outbreak in the Democratic Republic of Congo (DRC). As of May 21, 2018, 49 suspected, probable, and confirmed EVD cases, including 26 deaths, from the DRC have been reported to the World Health Organization (WHO). Currently, neither CDC nor WHO recommend any restrictions for travel in relation to this current outbreak. The risk of importation of EVD into California is very low. Nevertheless, infectious diseases are regularly imported into California. CDPH reminds all healthcare providers in hospitals, emergency departments, clinics, and other outpatient settings to routinely ask patients with acute, possibly infectious illness about recent travel, including international travel to Africa. Click here to read the full Health Alert.

Ebola is found in several African countries.  The first Ebola species was discovered in 1976 near the Ebola River in what is now the Democratic Republic of the Congo. Since then, outbreaks have appeared sporadically in Africa.

The natural reservoir host of Ebola remains unknown.  However, on the basis of available evidence and the nature of similar viruses, researchers believe that the virus is animal-borne with bats being the most likely reservoir.  Four of the five subtypes occur in an animal host native to Africa.

An Ebola Reference for Schools and Parents

Symptoms of Ebola typically include:

Symptoms may appear anywhere from 2 to 21 days after exposure to Ebola but the average is 8 to 10 days.  Recovery from Ebola depends on the patient’s immune response.  Among those infected during the current West Africa outbreak, 1 in 2 have died.  People who recover from Ebola infection develop antibodies that last for at least 10 years. 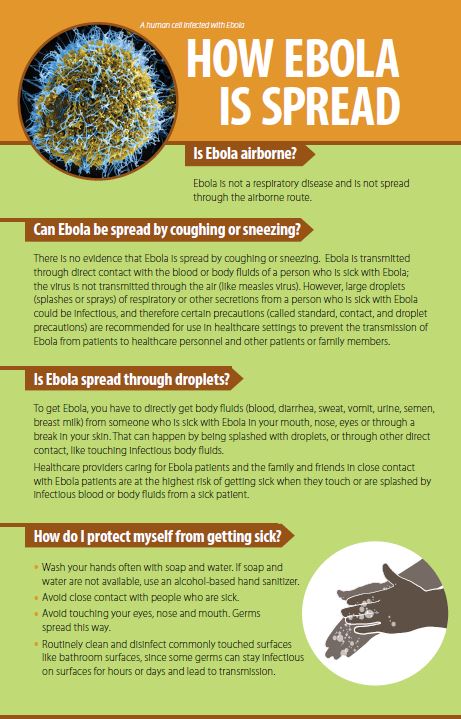 Ebola is an infectious disease.  It is transmitted by direct contact with blood and body fluids from an infected, symptomatic person or from contact with blood and body fluids from an infected animal.  It is not passed through the air like the flu.  You cannot get it from casual contact.  The virus is not carried in food or water.  Standard and droplet precautions (gloves, gowns, and surgical masks) are sufficient to protect healthcare workers from infection in most healthcare situations that would be found in the United States.  Proper removal of protective equipment and disposal of infectious waste, using procedures already in place in most U.S. healthcare facilities, will prevent spread of the virus.  Ebola virus spreads in developing African countries due to the need to hunt wild animals that serve as virus reservoirs, lack of soap and clean water, limited access to disinfectants, poor or nonexistent medical facilities, scarce disposable medical supplies, and cultural practices that involve extensive direct contact with the bodies of deceased family members.

Diagnosis of Ebola is based on a variety of laboratory tests and clinical symptoms.

Currently there are no specific vaccines or medicines (such as antiviral drug) that have been proven to be effective against Ebola.  Symptoms of Ebola are treated as they appear.  The following basic interventions, when used early, can significantly improve the chances of survival:

Timely treatment of Ebola is important but challenging since the disease is difficult to diagnose clinically in the early stages of infection.  Because early symptoms such as headache and fever are not specific to Ebolaviruses, cases of Ebola may be initially misdiagnosed.

Experimental treatment has been tested and proven effective in some animals but has not yet been evaluated in humans.

There is no FDA-approved vaccine available for Ebola.

If you travel to or are in an area affected by an Ebola outbreak, make sure to do the following:

Centers for Disease Control and Prevention