The symptoms of HIV vary, and many people who are infected with HIV do not show any signs or symptoms. Some 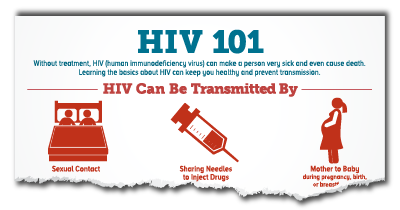 early symptoms may include:

The onset of symptoms signals the transition from HIV to AIDS (Acquired Immunodeficiency Syndrome). Many of the severe symptoms and illnesses of HIV disease come from the opportunistic infections that occur because your body’s immune system has been damaged. During this late stage of HIV infection, people infected with HIV may have the following symptoms:

Each of these symptoms can be related to other illnesses; the only way to know for sure if you are infected with HIV is to get tested.

In the United States, HIV is spread mainly by:

Less commonly, HIV may be spread:

Deep, open-mouth kissing if both partners have sores or bleeding gums and blood from the HIV-positive partner gets into the bloodstream of the HIV-negative partner. HIV is not spread through saliva.