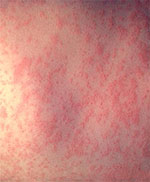 The symptoms of measles generally begin about 7 to 14 days after a person is infected. A typical case of measles begins with mild to moderate fever, cough, runny nose, red eyes, and sore throat. Two or three days after symptoms begin, tiny white spots (Koplik’s spots) may appear inside the mouth. Three to 5 days after the start of symptoms, a red or reddish-brown rash appears. The rash usually begins on a person’s face at the hairline and spreads downward to the neck, trunk, arms, legs, and feet. When the rash appears, a person’s fever may spike to more than 104 degrees Fahrenheit. After a few days, the fever subsides and the rash fades.

Measles can be a serious in all age groups. However, children younger than 5 years of age and adults older than 20 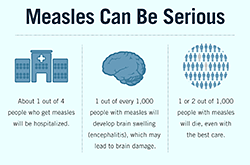 years of age are more likely to suffer from measles complications. About 1 out of 10 children with measles also gets an ear infection, and up to 1 out of 20 gets pneumonia. About 1 out of 1,000 gets meningitis (inflammation of the brain), and 1 or 2 out of 1,000 die. Other rash-causing diseases often confused with measles include roseola (roseola infantum) and rubella (German measles). Measles can also make a pregnant woman have a miscarriage or give birth prematurely.

Subacute sclerosing panencephalitis (SSPE) is a very rare, but fatal disease of the central nervous system that results from a measles virus infection acquired earlier in life. SSPE generally develops 7 to 10 years after a person has measles, even though the person seems to have fully recovered from the illness. The risk of developing SSPE may be higher for a person who gets measles before they are two years of age.

Transmission (How It Spreads)

Measles is highly contagious and can be spread to others from 4 days before to 4 days after the rash appears. Measles is so contagious that if one person has it, 90% of the people close to that person who are not immune will also become infected with the measles virus. The virus lives in the mucus in the nose and throat of the infected person. When that person sneezes or coughs, droplets spray into the air. The droplets can get into other people’s noses or throats when they breathe or put their fingers in their mouth or nose after touching an infected surface. The virus can live on infected surfaces for up to 2 hours and spreads so easily that people who are not immune will probably get it when they come close to someone who is infected. Measles is a disease that affects humans; it is not spread by other animal species.

What You Need to Know about Measles - English and Spanish