Plague is a disease that affects humans and other mammals. It is caused by the bacterium, Yersinia pestis.  Humans usually get plague after being bitten by a rodent flea that is carrying the plague bacterium or by handling an animal infected with plague. Plague is infamous for killing millions of people in Europe during the Middle Ages. Today, modern antibiotics are effective in treating plague.  Without prompt treatment, the disease can cause serious illness or death.  Presently, human plague infections continue to occur in the western United States, but significantly more cases occur in parts of Africa and Asia.

Plague symptoms depend on how the patient was exposed to the plague bacteria. Plague can take different clinical forms, but the most common are bubonic, pneumonic and septicemic.

Bubonic plague: Patients develop sudden onset of fever, headache, chills, and weakness and one or more swollen, tender and painful lymph nodes (called buboes). This form usually results from the bite of an infected flea. The bacteria multiply in the lymph node closest to where the bacteria entered the human body. If the patient is not treated with the appropriate antibiotics, the bacteria can spread to other parts of the body.

Septicemic plague: Patients develop fever, chills, extreme weakness, abdominal pain, shock, and possibly bleeding into the skin and other organs. Skin and other tissues may turn black and die, especially on fingers, toes, and the nose. Septicemic plague can occur as the first symptom of plague, or may develop from untreated bubonic plague. This form results from bites of infected fleas or from handling an infected animal.

Pneumonic plague: Patients develop fever, headache, weakness, and a rapidly developing pneumonia with shortness of breath, chest pain, cough, and sometimes bloody or watery mucous. Pneumonic plague may develop from inhaling infectious droplets or may develop from untreated bubonic or septicemic plague after the bacteria spread to the lungs. The pneumonia may cause respiratory failure and shock. Pneumonic plague is the most serious form of the disease and is the only form of plague that can be spread from person to person (by infectious droplets). 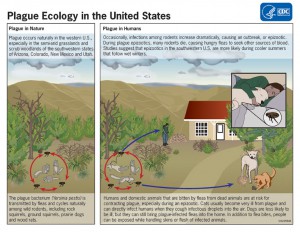 Plague is a serious illness. If you are experiencing symptoms like those listed here, seek immediate medical attention. Prompt treatment with the correct medications is critical to prevent complications or death.

The plague bacteria can be transmitted to humans in the following ways:

Flea bites. Plague bacteria are most often transmitted by the bite of an infected flea. During plague epizootics, many rodents die, causing hungry fleas to seek other sources of blood.People and animals that visit places where rodents have recently died from plague are at risk of being infected from flea bites. Dogs and cats may also bring plague-infected fleas into the home. Flea bite exposure may result in primary bubonic plague or septicemic plague.

Contact with contaminated fluid or tissue. Humans can become infected when handling tissue or body fluids of a plague-infected animal. For example, a hunter skinning a rabbit or other infected animal without using proper precautions could become infected with plague bacteria. This form of exposure most commonly results in bubonic plague or septicemic plague.

Infectious droplets. When a person has plague pneumonia, they may cough droplets containing the plague bacteria into air. If these bacteria-containing droplets are breathed in by another person they can cause pneumonic plague. Typically this requires direct and close contact with the person with pneumonic plague. Transmission of these droplets is the only way that plague can spread between people. This type of spread has not been documented in the United States since 1924, but still occurs with some frequency in developing countries. Cats are particularly susceptible to plague, and can be infected by eating infected rodents. Sick cats pose a risk of transmitting infectious plague droplets to their owners or to veterinarians. Several cases of human plague have occurred in the United States in recent decades as a result of contact with infected cats.

Plague is a plausible diagnosis for people who are sick and live in, or have recently traveled to, the western United States or any other plague-endemic area. The most common sign of bubonic plague is the rapid development of a swollen and painful lymph gland called a bubo.  A known flea bite or the presence of a bubo may help a doctor to consider plague as a cause of the illness.

In many cases, particularly in septicemic and pneumonic plague, there are no obvious signs that indicate plague. Diagnosis is made by taking samples from the patient, especially blood or part of a swollen lymph gland, and submitting them for laboratory testing. Once plague has been identified as a possible cause of the illness, appropriate treatment should begin immediately.

Plague is a very serious illness, but is treatable with commonly available antibiotics. The earlier a patient seeks medical care and receives treatment that is appropriate for plague, the better their chances are of a full recovery.

People in close contact with very sick pneumonic plague patients may be evaluated and possibly placed under observation. Preventive antibiotic therapy may also be given, depending on the type and timing of personal contact.

If you live or have recently traveled to the western U.S. or any other plague endemic area and have symptoms suggestive of plague, seek health care immediately.

Click here to view a brochure about plague in California.