Most people infected with Zika virus do not have any symptoms at all.  Among those who do, the most common 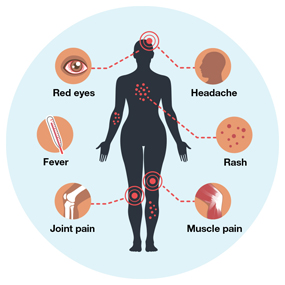 symptoms are fever, rash, joint pain, or conjunctivitis (red eyes).  Other common symptoms include muscle pain and headache.  The illness is usually mild with symptoms lasting for several days to a week.  Severe disease causing hospitalization or death is rare.

Zika virus is transmitted to people primarily through the bite of an infected Aedes mosquito.  These are the samemosquitoes that spread dengue and chikungunya viruses.  Aedes mosquitoes are aggressive daytime biters, prefer to bite people, and live indoors and outdoors near people.  Mosquitoes become infected when they feed on a person already infected with the virus.  Infected mosquitoes can then spread the virus to other people through bites.

Zika virus can be transmitted from a mother to her baby.  Zika virus ia a cause of microcephaly and other severe birth defects.  A mother already infected with Zika virus can pass the virus to her baby during pregnancy or around the time of the baby's birth.  To date, there are not reports of infants getting Zika virus through breastfeeding.  Because of the benefits of breastfeeding, mothers are encouraged to breastfeed even in areas where Zika virus is found. 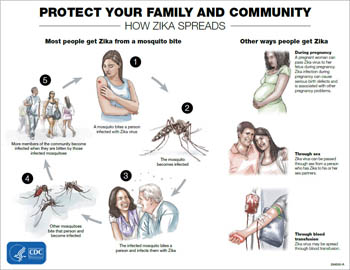 Zika virus can be transmitted during sex, even if the infected person does not have symptoms at the time.  It can be passed from man to man, from man to woman, from woman to man, and from woman to woman during sexual activities.  Studies are underway to fund out how long Zika virus stays in the semen and vaginal fluids of people who have Zika virus and how long it can be passed to sexual partners.  We know that Zika can remain in semen longer than in other body fluids, including vaginal fluids, urine, and blood.