Historically, people of color have had lower homeownership rates than whites, due to a legacy of past discrimination and redlining (The Greenlining Institute). The Federal Housing Administration (FHA) practiced a policy of “redlining” when determining which neighborhoods to approve mortgages in. Redlining is the practice of denying or limiting financial services to certain neighborhoods based on racial or ethnic composition without regard to the residents’ qualifications or creditworthiness (FHCGB). The term “redlining” refers to the practice of using a red line on a map to delineate the area where financial institutions would not invest.

The Home Owner’s Loan Coalition (HOLC), developed color-coded maps indicating the level of security for real estate investments in 239 American cities based on assumptions about the community, not on their ability to satisfy lending criteria (FHCGB).

The following is how HOLC classified neighborhoods by color:

The University of Richmond and a team of researchers at the Digital Scholarships Lab has digitized the collection of neighborhood risk assessment maps developed by HOLC as part of a project named Mapping Inequalities: Redlining in New Deal America.

The dataset is now available on PolicyMap, and users can overlay this polygon data with several other layers to explore trends in residential and economic segregation, along with a host of other areas (Policy Map).

Another project called the Testbed for the Redlining Archives of California’s Exclusionary Spaces (T-RACES) will be one of the first to make use of a new HASS (Humanities, Arts, and Social Sciences) Grid. The HASS Grid will store and make available the redlining collection using UNC developed data grid infrastructure which will make the redlining documents accessible alongside a rich array of relevant information drawn from census tract data, municipal ordinances, and insurance protocols, allowing researchers to ask the broader questions about context, origins, and legacy of redlining. These benefits will be shared across all ten University of California campuses (T-RACES). Demo can be found here.

For a long time, homeownership has been the foundation of the American Dream, allowing families to accumulate savings and contribute to neighborhood stability. However, housing instability encompasses several challenges such as having trouble paying rent, overcrowding, moving frequently, staying with relatives, or spending the bulk of household income on housing (Healthy People 2020).

The shortage of affordable housing takes the hardest toll on low-income and people of color. Making this population more vulnerable to health and safety exposures like: respiratory and cardiovascular diseases from indoor air pollution; illness and death from temperature extremes; communicable diseases spread because of poor living conditions, and risk of home injuries (WHO).

Access to quality affordable housing allows families to have more disposable income for nutritious food and health care. It can also reduce the spread of infectious disease, noise, and stress due to overcrowding.

What is being done?

Health Departments and social justice organizations are working nationally and in different communities to raise awareness about redlining and work towards community led solutions. Below are examples from several communities.

Dr. Muntu Davis presentation on Health and Housing in Oakland: The need for comprehensive solutions to the housing crisis

With the launch of their interactive story map, the city is convening a year-long community dialogue to gain understanding, to collect ideas, and to formulate recommendations that support citizens’ wealth-creation, homeownership and development opportunities in west Louisville and other areas that have experience or are now experiencing disinvestment. By beginning this dialogue, the city intends to acknowledge the past and better their future by removing hurdles that prevent residents from reaching their full human potential.

In addition to REHDI San Diego has a Live Well San Diego initiative which contributes to Healthy Safe, and Thriving Communities.

The California Reinvestment Coalition (CRC) works toward building an inclusive and fair economy that meets the needs of communities of color, and low-income communities by ensuring that banks and other corporations invest and conduct  business in our communities in a just and equitable manner.

King County uses a visual “stream” metaphor to frame its work on Equity and Social Justice. The stream is a visual reminder that inequities in outcomes have their start in “upstream” policies and practices that influence people’s access to power resources. 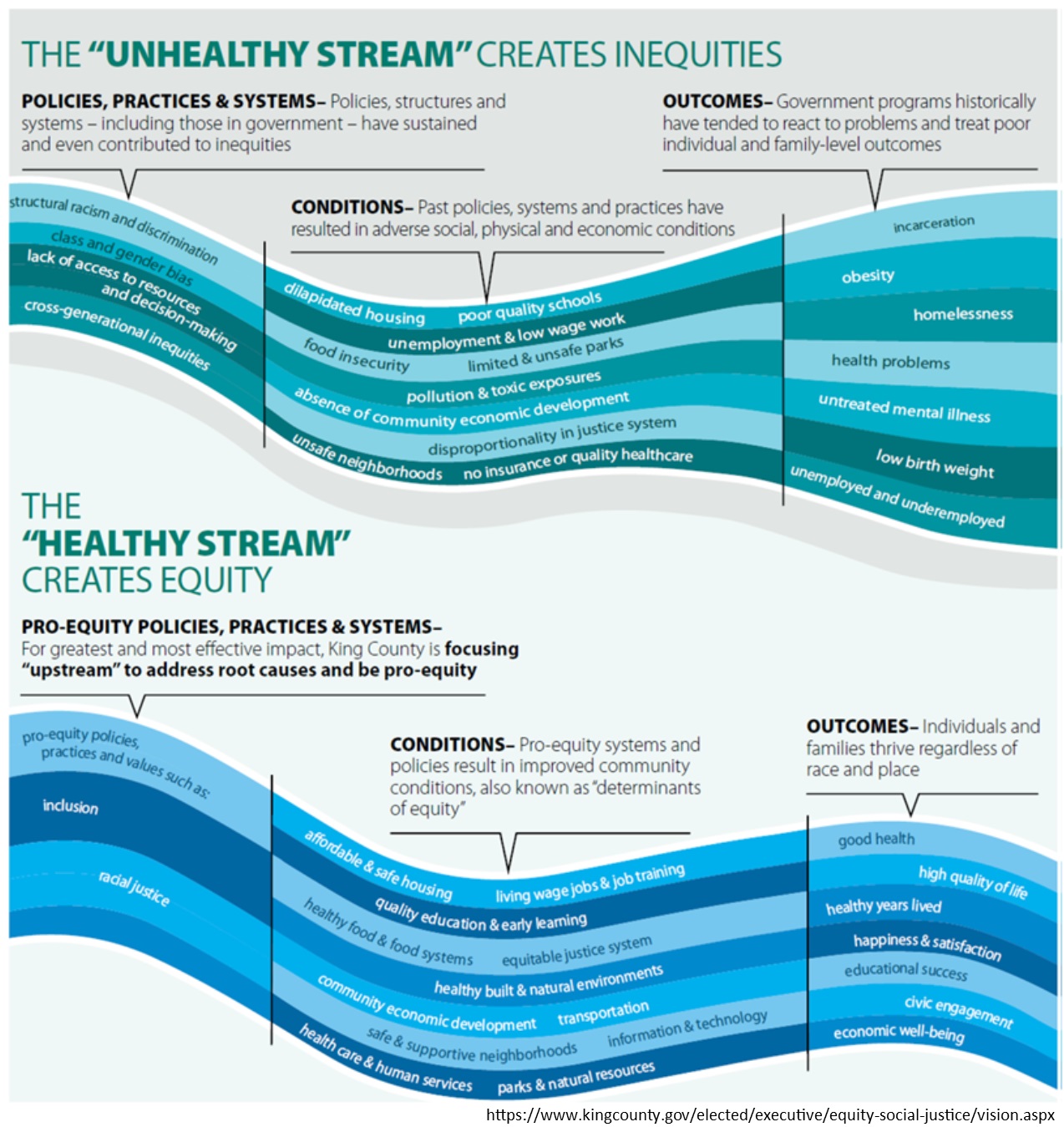 Monterey County Health Department (MCHD) is working with a wide variety of community partners on improving inequities in the county, including those related to housing.  Staff are studying the history of redlining in the county with the plan to produce maps for use by the public.  Stay tuned for updates on this project.

Meanwhile, staff also work on making or improving local policy to reduce housing inequities. Health in All Policies is a framework used in Monterey County to address health inequities and focuses on identifying the root causes of poor health. HiAP is endorsed by the World Health Organization and utilized by the State of California through the Health in All Policies Task Force comprised of 19 state departments and agencies.

MCHD HiAP has produced information on housing inequities in the county.

The brief is available as a downloadable pdf

And in an interactive on-line format

In addition, the county’s 2014-2018 Community Health Improvement Plan for Monterey County outlines efforts to achieve community health and well-being for all county residents through the alignment of activities and collaborations among numerous partnering agencies. Some of these groups include:

The strategies and outcomes are now housed in online strategy maps and the collective impact efforts underway are supported through Impact Monterey County, a collaborative and coalition networking effort that supports everyone to achieve the vision of together, a healthier, safer, thriving Monterey County.

More information on the long term impact of red-lining