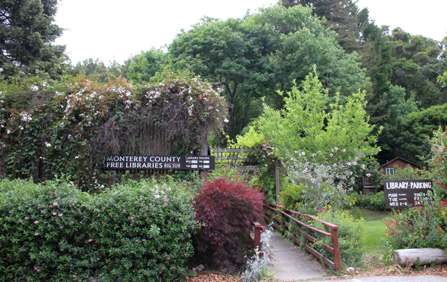 Monterey County Place Names explains the name, Big Sur, as a partial translation of a phrase used by the Spanish: El País Grande del Sur. The area can be described as a small stretch of the California Coast between the Santa Lucia Mountains and the shore of the Pacific Ocean and between Carmel River and the southern Monterey County line. Its physicality might be debated, but its beauty and grandiosity are not.

Anne Hadden, founder of the Monterey County Free Libraries system, was hired on September 1, 1913. Known as the “Librarian on Horseback,” Anne is remembered for opening branches in 1916 on the roadless South Coast of Big Sur; one at the Harlan home, and one at Pacific Valley School. The first books were brought in by pack animal after having made the arduous ride from Jolon. The Big Sur Branch, named Arbolado until 1915, was opened in November of 1914. In February 1974, a permanent home was found for the library in a trailer on Ripplewood Resort’s property.

Library service  provided since 1914.  Located at the Ripplewood Resort since 1974.