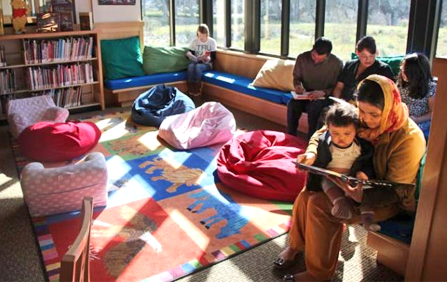 
Services at this location are significantly disrupted at this time.  Please call your Monterey County Free Libraries staff at 831-883-7555 Monday - Saturday 10 am- 6 pm for more information.

According to Monterey County Place Names by Donald Thomas Clark, the township of Parkfield lies alongside Little Cholame Creek in the extreme SE corner of the county. Parkfield, so named for the magnificent “Park” of oak trees, was established as a post office in 1884, according to Edwin Taylor, a Parkfield pioneer who came to the Cholame Valley in 1879. Descendants of Edwin Taylor still live in this valley. The Cholame Valley’s largest portion lies in the southern tip of California’s Monterey County, with the lower section spilling over into northeastern San Luis Obispo County. The valley is approximately 25 miles long and varies in widths of up to five miles. Temperatures in Parkfield range from down around 7 degrees to over 110 degrees.

Monterey County has provided library services in Parkfield since 1914. The building in the above picture was closed in 2011, and there are plans for reopening in the repurposed teacherage in 2020.

Parkfield Branch became affiliated with MCFL September 24, 1914. Its present location is in a house next to the Shandon Unified School District. Opening date TBD
Square Footage: