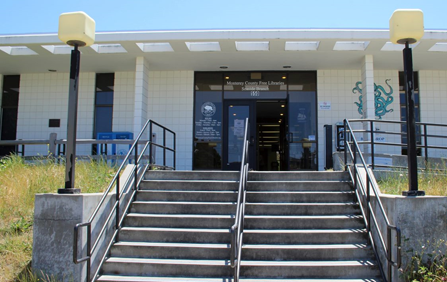 Seaside is a city of 9.4 square miles, incorporated October 13, 1954. The city’s beginnings trace back to 1887 when Dr. John L. D. Roberts purchased 150 acres of the former Rancho Noche Buena owned by his uncle, David Houghton for $5,000. It had been at the suggestion of his uncle that he move to California after he’d obtained his medical degree at the University of New York City.

The Seaside Library started in 1930. The Emerson Library Club was a social club formed in 1931 whose members pooled all their books together and enabled other people in the area to borrow books. The eventual need for more books and a space to house the books was answered by the Monterey County Library system in Seaside on October 15, 1931. On August 25, 1975, the doors opened at the current 10,000 square foot library building at 550 Harcourt Avenue with seating capacity for 81, a meeting room with a seating capacity of 75, large enough to hold 50,000 volumes. The name was changed to Gordon R. Forrest, after a former City Manager.

Seaside Branch became affiliated with MCFL in 1931. It was moved to its present location in 1975.
Square Footage: 10,000